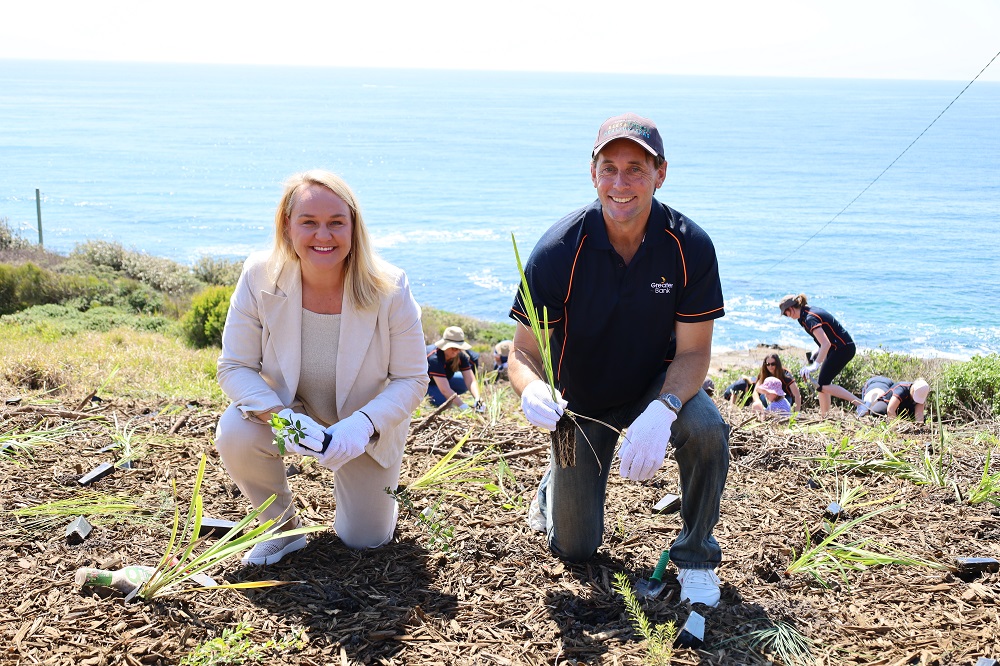 The Hunter Region is the major beneficiary of Greater Bank’s 75th anniversary celebrations, receiving 45,000 trees to be planted at sites across the region.

To mark 75 years of growing greater together, Greater Bank announced in August that it was planting 75,000 trees in the areas it calls home across regional NSW.

Lord Mayor of Newcastle, Cr Nuatali Nelmes, along with Greater Bank Chief Executive Officer, Scott Morgan, launched the Newcastle planting program in November at King Edward Park. They were joined by Greater Bank employees and members of the community to plant the first of 4,000 trees earmarked for the site.

Taking place on the iconic park’s sea cliffs and coastal headlands, the planting will enhance a protected and endangered ecological community known as Themeda grassland and also re-establish habitat for local wildlife, including birds, small marsupials, insects and reptiles.

Launching the Newcastle planting project, Lord Mayor Nuatali Nelmes said the City of Newcastle was committed to creating a greener local government area and thanked Greater Bank for its support.

“Thanks to support from Greater Bank, we’ve been able to significantly add to our bushland, watercourse, street and park tree planting programs to ensure our community continues to benefit from our urban forest,” Cr Nelmes said.

“The greening of our urban landscape has a positive impact for Newcastle and our community. Enhancing our natural areas, planting in streets and parks create spaces where people can relax and be more active.

“Green spaces are cooler and improve liveability while providing environmental improvements such as air quality, protecting and filtering our water, and also providing natural habitat, food and shelter for native wildlife.”

This is in addition to planting sites within Greater Bank’s traditional home around Lake Macquarie, the Hunter and Port Stephens.

Greater Bank CEO, Scott Morgan, who said the tree planting projects are symbolic of the role Greater Bank has played in growing together with its communities over the past 75 years.

“As we reach our 75th year of operation, we're proudly celebrating the role we have played in helping this region we call home,” Mr Morgan said.

“Greater Bank was established in Hamilton in 1945 and we are still headquartered there today. While our operations have grown significantly over the past 75 years, well beyond our traditional boundaries, the Hunter remains the heart of our operations and customer base.

“It’s important for us, that in celebrating the milestone, we give back to a community that has given us so much and in doing so contribute to a cause that is important to our customers.

“The need to protect and nurture the environment was a consistent message delivered by customers across all our areas of operation, which is why we’ve committed to planting 75,000 trees throughout regional NSW."

“The trees will not only provide these communities with an ongoing legacy to mark this milestone, but as they grow, they will provide an enduring symbol of our commitment to social responsibility and sustained support of local communities.

“We have been working closely with the local councils and environmental groups to select these sites and they have also provided valuable direction as to the types and species of plants to ensure they complement and support the local habitats,” Mr Morgan said.