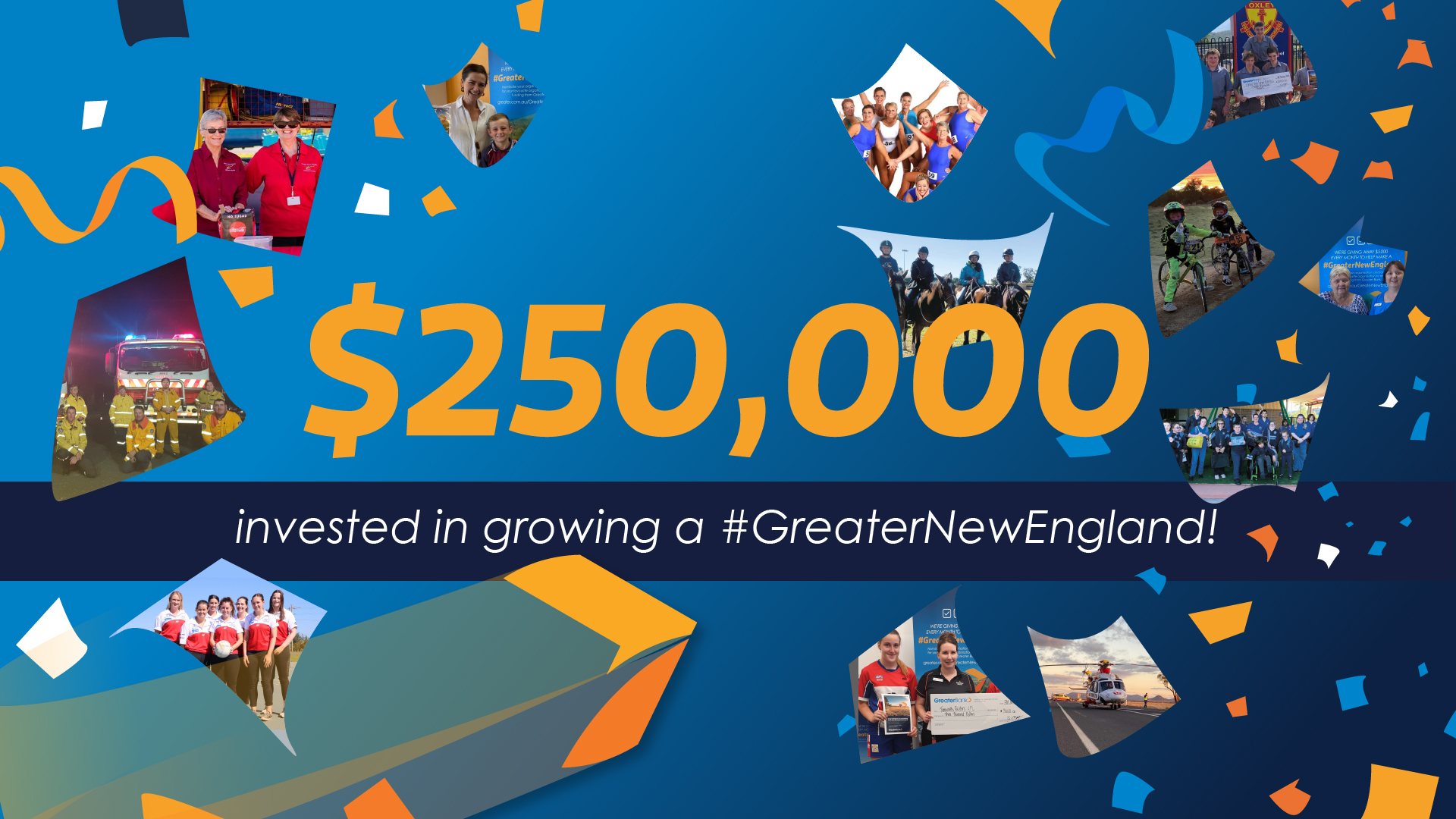 Since 2016, we’ve been supporting charities and community groups across the New England region through our #GreaterNewEngland funding program.

This month, the program has reached an important milestone of $250,000 in funding donated to 150 exceptionally worthy groups who together are making a greater New England.

The program was launched as #GreaterArmidale, however, such was its success, it was expanded in February 2018 to also incorporate Tamworth and Gunnedah.

As part of Greater Bank’s philosophy that the best way to make communities stronger is by supporting organisations that bring people together, the program has provided $5,000 in funding every month that has supported a diverse range of community organisations.

Community groups can nominate to be part of the program which sees Greater Bank select three organisations that the public can then vote on each month to determine how the $5,000 in funding is distributed - $3,000 to the winner and $1,000 for each runner up.

The program’s September winner was PCYC Tamworth’s Fit for Life, who plan to use the funding to expand their program offering that aims to empower young people by developing their skills, leadership and character.

Senior Constable Andrena Sandison, a Youth Case Manager with Tamworth PCYC, said the program was predominately focused around boxing, which is a major part of PCYCs history, however due to COVID restrictions they incorporated other activities such as soccer, hockey and lacrosse to ensure they could meet social distancing requirements.

“Winning the #GreaterNewEngland funding means we can improve our sporting equipment supplies, which will allow us to expand our program offering and increase the number of young people engaged in the program,” Senior Constable Sandison said.

“A recent reward trip to Lake Keepit highlighted that the swimming ability of the group in general was poor, so we’ll also use part of the funds to support formal swimming sessions in Term 4 of 2020 and Term 1 of 2021.”

Greater Bank’s CEO Scott Morgan said he was exceptionally proud of the program and the difference it has made to so many community groups across the region.

“Supporting the communities that support us is fundamental to our business and the #GreaterNewEngland program is a wonderful representation of this philosophy,” | Scott Morgan, Greater Bank CEO.

“Over the past four years our funding has had a positive impact on so many organisations, many of whom struggle to attract corporate sponsorship or rely heavily on a few dedicated volunteers to fundraise.

“We’ve seen sporting clubs purchase equipment and upgrade facilities, community groups expand their service offering to better support the region’s most vulnerable people and schools fund extra-curricular activities for students who would otherwise not have the capacity to do so.

“It’s wonderful to be part of a program that is making a real difference to a community we have called home for 40 years.”