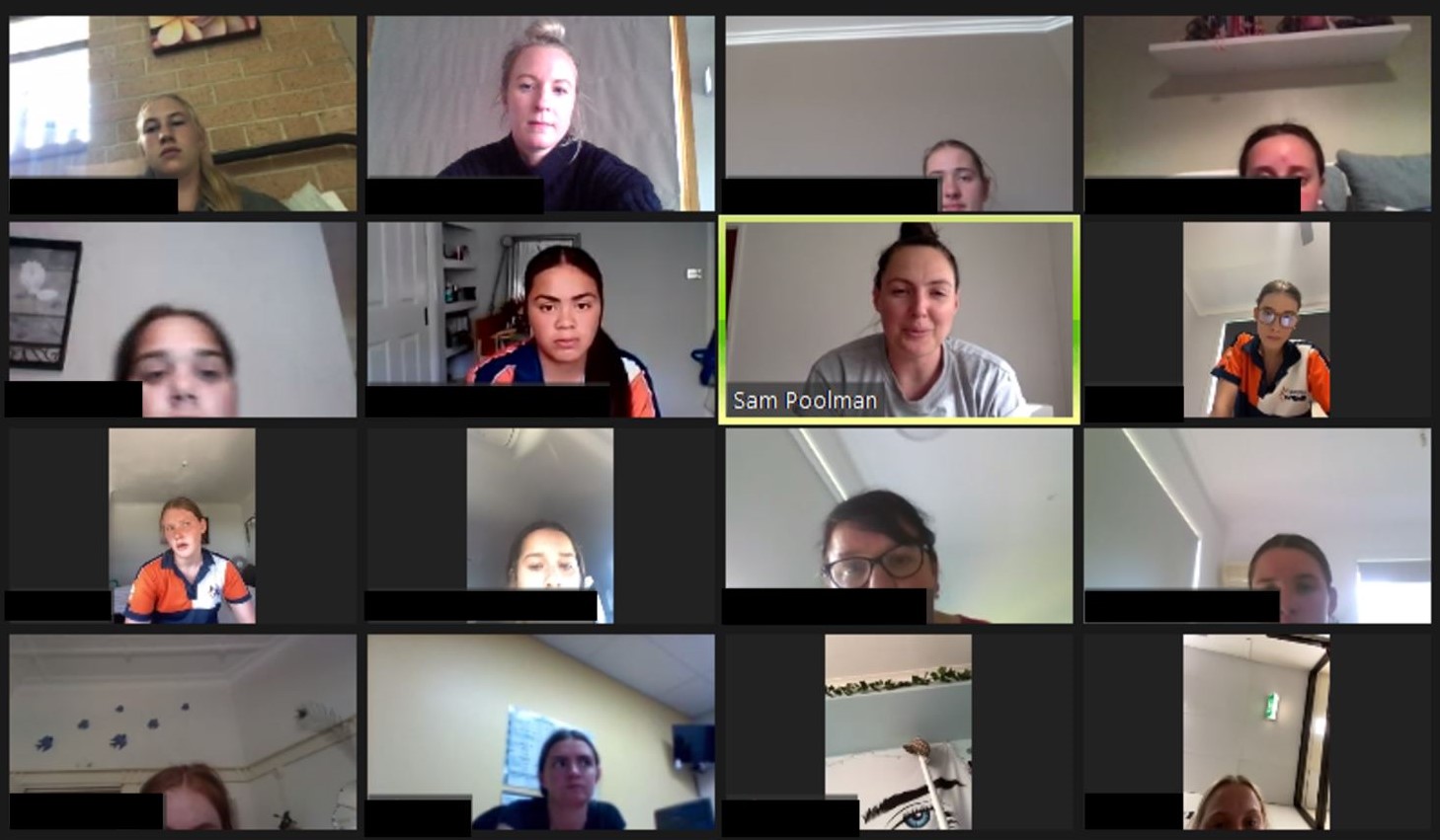 The Western Region Academy of Sport netball squad wrapped up their season recently in a very 2020 fashion; with a zoom call.

The disappointment of a much-interrupted season was tempered though when a surprise guest joined them on the call - GWS Giants netballer, Sam Poolman.

Poolman provided the young athletes with an insight into her representative netball journey, some inspirational words of advice on dealing with adversity and setbacks, as well as a glimpse inside the national netball league’s COVID bubble as she and her Giants team mates tackled the challenges of what was a very different looking 2020 season.

“It was such a disappointing season, particularly for those athletes in their final year in the program, but I wanted to impress upon them that while they may not have had the opportunity to achieve or learn as much on the court, the life lessons they learned off it were just as valuable,” Poolman said.

“Resilience is something that we spoke about on the call. We’ve all had it tested this year like never before in facing the challenges around COVID, not just in regard to our sport but life. We have all faced adversity, unexpected challenges and disappointments, but it’s how we respond that’s important. This is what will define all of us moving forward.”

Poolman said that she thoroughly enjoyed the opportunity to meet and speak with the academy athletes and hopes that they were able to take away some shared experiences.

“I’m really passionate about working with young netballers and helping with their development pathway. I’ve done quite a bit of work with the Hunter Academy athletes in recent years, and while it wasn’t how I would traditionally work with netballers, it was really nice to meet and talk with these Western Region athletes. I hope they were able to take something away from our chat about my experiences in the game.”  | Sam Poolman, ASPIRE Netball

WRAS Executive Officer, Candice Boggs, paid tribute to all involved in the program, from the athletes to coaches and support staff, for the way in which they managed the challenges of a season like no other.

“When COVID restrictions were put in place we were forced to make major changes to the rollout of the programs. This was tough for the athletes, all of whom were really excited about the season ahead and then faced the prospect of the program being cancelled all together,” Candice said.

“On top of that, they also faced other major adjustments in their life such as home schooling and self-isolating. It was an incredible amount for them to deal with.

“While we managed to make up for most of the training sessions that were cancelled due to COVID, it was incredibly disappointing to see the cancellation of the two tournaments they were scheduled to compete in. They’re always a highlight for the athletes, providing an opportunity to compete and test themselves against the other regional academies.

“What our athletes have shown throughout the year though is great resilience and strength of character. It was tested like never before and I am exceptionally proud of how they have all come through these challenges.”

Ms Boggs said the traditional WRAS presentation evening that celebrates the achievements of the athletes and provides a great send off for the graduating athletes, was also a victim of COVID this year, however, the final zoom call and visit by Sam Poolman in some way made up for it.

“The looks on the girls’ faces when Sam joined our call was priceless. It was a wonderful surprise and they gained some great insights from one of the game’s best players right now who had a very similar start to her netball journey to the girls in our program. It really was a very positive end to a tough season for them all.

“We can’t thank Sam enough for taking the time to meet with the 2020 netball squad members, and also Greater Bank for their commitment to our netball program and for facilitating the meeting with Sam,” Candice said.