Working full time as a Customer Service Officer at Greater Bank’s Charlestown branch and playing professional football with the Newcastle Jets A-League Women’s team ensures she always has plenty of balls in the air.

Jemma and her Jets’ team mates have recently endured an incredibly tough five-week pre-season campaign in preparation for this season's opener again Sydney FC, which took place on Saturday.

According the 25-year-old striker, it has been the support of her Greater Bank “team mates” that has allowed her to follow her childhood dream of representing her home town in Australia’s premier women’s football league.

Jemma joined Greater Bank in February this year working casually within the branch network before spending time at Beresfield. She then took on a full-time role at Charlestown in May.

“The team at Beresfield initially and then the group here at Charlestown have been so supportive of my football and have allowed me the flexibility around training, particularly over the past five weeks of pre-season. It will be even more important as we get into the season,” Jemma said.

“They’re all more than willing to help me out where they can and, to be honest, I couldn’t successfully juggle my work and football without them.”

While the A-League Women’s competition has grown in prominence and stature since launching in 2008/09, the reality for the majority of players like Jemma is they need to continue to work full time outside of the sport to make a living. 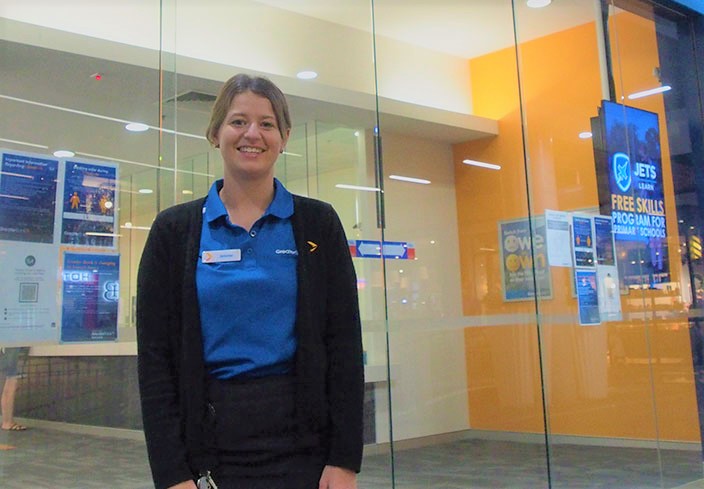 “I’m in the gym before work two days a week and then four days I’m heading straight to training after work. There is the travel and playing on the weekends and the recovery session the following day. Then, I get up Monday morning and do it all over again,”

“It isn’t easy but it really is something I love.”

Born in Kurri Kurri, Jemma started playing football with the Weston Bears before progressing to the Emerging Jets program at the age of 13.

While a career in Australia’s top women’s football league beckoned, an opportunity out of high school to travel to the USA to study and develop her football talents in the US college system proved too good to pass up.

“I spent four and a half years in America, which was such an incredible experience. I had the opportunity to travel the country, learn so much about the game and also graduated with a Bachelor of Business Management,” Jemma said.

Jets:LEARN Online allows schools to score a coaching clinic from their heroes. We've teamed up with the Jets to give primary schools an online program of football skills lessons specially designed by your favourite Jets players. Jets:LEARN Online is available to all primary schools across Newcastle and regional NSW completely FREE. To take part all you need to do is register your interest and the Newcastle Jets will be in touch with more information.
Visit Jets:LEARN﻿
“When I was done though, it was time to come home. Football was my full-time job over there and pretty full on, so when I got back I was happy to focus on starting a new life and playing local football. I didn’t have any ambitions of playing in the (then) W-League.

“I signed with Newcastle Olympic in 2020 and had a pretty good season. I then got a call from Ash Wilson (Jets Head Coach), asking me if I was interested in signing. In that moment I was 13-years-old again, that kid with a dream, so just had to take up the offer.”

After appearing in 10 of the Jets’ 12 matches in her first year with the club, Jemma has her sights set on a regular starting position in 2021-22.

“Last year was a real learning experience for me and I took plenty from the season,” Jemma said.

“Establishing myself as a first 11 player is my main goal and something I am really focused on. Getting myself on the scoresheet is also important. As a striker, it’s my job!”

You can catch Jemma and her Newcastle Jets team mates in action at their first home match of the Season this Friday 10th December, where they take on Wellington Phoenix in a Jets double header! Tickets on sale now.

Supporting the Jets since 2015!

Greater Bank has been behind the Jets as Major Community Partner since 2015. Find out how you can get closer to your A-League Mens and Womens heroes than ever before through our Jets:CONNECT program.